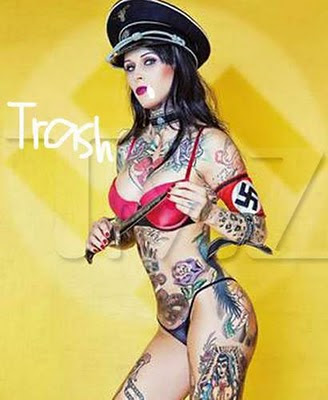 It’s been a bit since I posted. As usual, life (two young kids, a husband, a house, a job) gets in the way of my writing.

All this Jesse James and Michelle McGee gossip has irritated me to no end. I guess my biggest gripe is that all the reports talk about McGee as a slut and point out how she is a Stripper Mom. Like that’s the problem.

It’s the old double-standard that just doesn’t want to die.

People act all shocked and disgusted that McGee is trying to make a buck off of her affair with Jesse James. But why? She sees an opportunity to make some money without having to take her clothes off! Why wouldn’t she jump on that chance?

Of course, I will admit the whole Nazi photo shoot is ridiculous, but no one would have even cared about it if it hadn't been for this cheating scandal.

I mean, are famous people that stupid? If you’re going to cheat on your spouse and you are a gossip-worthy persona, guess what? When the “relationship” goes sour, which it more than likely will, someone is going to blab to the press for cash. Please don’t be surprised by that fact.

A recommendation to all famous people who want to cheat on their spouses: Get a nondisclosure agreement before you proceed!
Posted by Unknown at 10:12 AM 3 comments: