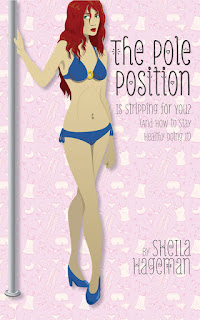 My Fox Detroit has a piece, Why Some Exotic Dancers Become Trapped by Alexis Wiley, about how easily women can become trapped by the stripping life. A lot of the issues discussed are what I examine and offer help with in my book The Pole Position: Is Stripping for You?


“Kalisha Madden and Cherice Gordon have been missing for nearly three months. Both women are exotic dancers from Detroit. Many wonder if their lifestyle as strippers played a role in their disappearance. Often times, the lure of money puts these women in harm's way. FOX 2's Alexis Wiley takes a closer look at why it's so easy for some of these women to get trapped.”

Wiley interviews a few women who are dancers, but who had their glamorous expectations dashed by the true stripping world.

The message we see coming through is that regardless of the great money they are making, it really might not be worth it because it’s too easy to get distracted by the vices that go along with fast money.

I hear my own story in their words: "My first job was at Chuck E. Cheese, so I was like that looks a lot better than Chuck E," said Laura.

I thought the same about working at Dunkin’ Donuts and J.C. Penney.

The women discuss the dangers involved even if you’re playing by the rules, but even knowing this, they are not ready to leave the strip world.

"Once you're in, you're kind of stuck in because you start accumulating all these things that you didn't have before," said Laura. "You're kind of forced to keep going to work and paying these bills for this stuff that you didn't really need in the first place and it's just a trap."

But after six years, she knew she had to leave the world because she was feeling “dead.”

She went on to create Eve's Angels, which consists of women who go to clubs to offer support without judgment to strippers when they are ready to quit.

Should Breastfeeding Photos Be Kept Private?

Her feelings are that while breastfeeding is wonderful and all, it should be all about baby and not about mom and her needs.

“Breastfeeding is an intimate act, so why are you sharing it online? I get it if you're a website dedicated to showing women the positive aspects of breastfeeding, and promoting the normalcy so we can all get over our hang-ups. But as an everyday mom just trying to feed your baby, why would you want to take your picture and post it? Breastfeeding is very personal, between you and your baby. Not you and your 3,000 Facebook friends. You don't post pictures of you and your partner in an intimate embrace, do you? And if you do, why in the world would you do that?

That's called over-sharing, people, and it's no wonder your friends get annoyed. Just like you don't want to see a picture of your FB friend in her bikini, maybe she feels weird about seeing your naked breast. (Note, if either of these scenarios is popping up because you're somewhere in public and a group photo is being taken -- all bets are off. I'm talking about posed, on purpose, intimate photos. There's a huge difference.)”

Hmm...I get what the writer is saying, but I think I kind of disagree.

Yes, breastfeeding is about providing the best for one’s baby, but there are obviously a lot of other emotions and issues attached to it for the mother.

And while nursing is an “intimate” act in one sense, it’s also just about eating. Why wouldn’t I post a photo of my child eating?

A lot of mothers may feel the need to also make a stand for the mothers who feel shamed about nursing and posting pics in a public forum can be a show of support, a way of saying—Hey! Look! I’m nursing and there’s nothing wrong about it!

And the thing I just don’t get is that people seem to think that when moms nurse that they’re sitting there with their shirt off giving a show. I’ve never seen a mother just letting it all hang out in public. When a baby is nursing, most of the breast is hidden.

All this controversy over nursing though, with moms being accused of being like strippers for nursing in public though...it’s making me want to show the difference to the world!

Do a little striptease in public and then nurse my baby. The world would see the difference!
Posted by Unknown at 10:53 AM 2 comments: What I find most fascinating is that she was dancing up to a few years ago.

“Tempest Storm's career trajectory was even longer than her contemporaries. Although she officially retired in 1995 at the age of 67, she occasionally danced on stage until June 2010, when she broke her hip at the Plaza Hotel in Las Vegas, according to the Las Vegas Sun.”

Watching this video of her really made me realize there is such a lovely vulnerability, sensuality, and openness to well-done stripteases that has so little to do with outright nudity.

Watching her dance brings me back to my days stripping and how much fun I had when I was allowed (and I allowed myself) to strip as performance and not just as body part showing.
Posted by Unknown at 12:20 PM No comments:

The Huffington Post has an interesting article on a newly studied depression in mothers—not your regular old postpartum, but weaning depression.

“One major contributing factor may be actual physiological changes taking place in the body. Breastfeeding stimulates the production of hormones such as oxytocin, known colloquially as "the love hormone." Mothers' moods may plummet in its absence.

In addition, many women may experience a profound sense of grief and loss when they wean.”

Reading this piece brings me a new sense of relief around some of the mood issues I’ve been dealing with of late. I’ve been sick for over a month now and have dealt with an exhaustion that bewilders me.

I’ve also been weaning my youngest, but very slowly, letting him take the lead.

Perhaps some of what I’ve been experiencing could relate to this weaning process, not only on an emotional level of sadness, but in fluctuations of certain hormones.

“As long as research looking at the "what" and "why" behind depression and weaning remains relatively scant, then, the best mothers may be able to hope for is that awareness of the potential connection spreads.”

Whenever I become aware of a possible connection to some aspect of my depression I feel a new sense of being able to make it through.

I hope this story will resonate with other women experiencing these shifts in mood during weaning and perhaps spark a new wave of research.

Leave it to Sinead O'Connor to cause a headline by claiming she'd like to pose for Playboy.

Regardless of why she would want to pose for this magazine, I find it more interesting what it brings up for me.

Wonderings of what it means to be a feminst in this day and age.

Check out my blog on The Huffington Post...
Posted by Unknown at 9:46 PM No comments: