I love this piece at The Huffington Post because it made me realize that I’m not the only one with embarrassing things to write about. It’s not easy being a memoirist and having to reveal the things that most normal humans keep hidden. I guess that’s the thing about being a Stripper Mom—I have to be willing to continually expose myself.

The worst part isn’t exposing myself though, it’s the embarrassment I worry my family will feel. From everything I’ve learned though (about writing and life), I can’t let that stop me. Just like Ashley Parker’s uncle who published his senior illustrated sex book without worry of his family’s or anyone else’s squirminess, I just have to write what I need to write. If other people have a problem with my openness, then that will be their issue, not mine.
Posted by Unknown at 11:08 AM No comments:

This blog post got me thinking about something…I wonder if there really are a lot of women out there who are thinking of stripping now that times are tough. We’ve all heard the old single-mom-stripper sad story. Stripping so she can afford diapers.

I imagine that customers are probably being especially stingy though.

Getting a guy to tip was almost always a challenge. I can just imagine their excuses now.

“I was laid off, Darling. You understand, right? I really need to see some T & A to make myself feel better…to feel like a man. How about helping a fellow out?”

“I’m a little low on the ones tonight, Sweetheart. How about floatin’ me a lap dance until next week.”

“How about a recession special? Private dances half price? Huh? What do you mean? Well, yeah…I’ve got enough money to buy beers, but, um…you’re already naked, so why should I have to tip you?”

“I will gladly pay you tomorrow for a peek today…”
Posted by Unknown at 5:02 PM No comments:

Who Gave Her Sugar? 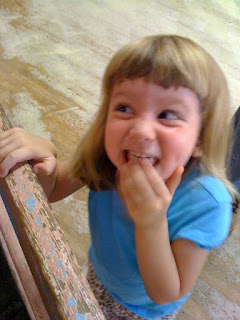 I’m really wondering if someone snuck some sugar (or some speed) into my daughter today. I picked her up from school with Cole in tow and went to the library. As soon as we hit the children’s department she was running and saying in a booming voice, “Fairy books! Fairy books!” And she was doing it in a baby, sing-song style.

Of course, the shelf had the same Rainbow Fairy books that we’ve already read one zillion times each, so we asked the librarian if she could recommend something similar, which she did. Every book she showed Genny got a, “Uh, nah…”

Then Gen starts yelling, “I have to go to the bathroom!”

Once that was taken care of, it was more, “Fairy books! Fairy books!” Finally, she settled on some Tiara Club books.

We went downstairs with me now holding Cole because he was fussing and then Genny has to go poop. So it’s back to the bathroom where the other lady in there gets to hear how it’s “a messy one.”

Now, it’s finally time for me to look at some books for me and Genny wants to crawl into the shelves. Then at checkout she’s lying on the floor under the counter with her fingers in her mouth. Next it’s time to get her coat on, Cole’s bear zippy-coat, and oh, yes, don’t forget, mom…your own coat.

We get outside and some other Mom has parked her minivan so close to mine that I can barely get my stroller in the trunk.

We’re home now. Genny is watching one of her library videos, Cole is in his bouncy seat talking to a plastic squirrel, and I am dreading the pile of dirty dishes. And I have no idea what I’m cooking for supper.
Posted by Unknown at 5:01 PM No comments:

This is supposedly a drawing by a child of her mother at work. When I first saw it I thought it was a stripper mom, but then I read the explanation. This is just your average mom selling a shovel at Home Depot. Hmm…why’s the shovel so big?

Another mother thought the drawing showed a bank teller. Hmm…even children know you can only approach a bank teller from the front. And where’s the bowl of lollipops?

I think it’s probably just a drawing by an adult trying to be funny. A child who would have drawn this would (hopefully) never have been inside of a strip club, so how would they know what a stripper pole is? Oh wait, I do remember a few times when stripper moms actually did bring their children to work. It was more than odd to have a little boy acting blasé in front of half a dozen naked women.
Posted by Unknown at 5:51 PM 1 comment:

By now you’ve heard that Octo Mom, Nadya Suleman, was once a stripper! And of course this is sensational and surprising—scandalous even. But then you learn that she was a stripper for one night. One night.

"The only thing I'm going to say is we all have a past," Suleman said, "and I don't want to resurrect that. It's dead...but no, not like a career or job. Not like that."

I hardly think that doing something once makes you one. For example, I once worked at McDonald’s for an hour and a half, but I do not consider myself an ex-McDonald’s employee. I consider myself a smart young woman for getting out of a horrible and low-paying possible job.

So, let’s leave Octo Mom alone on this one issue. She was not a stripper. She tried out stripping and decided it wasn’t her cup of tea. Good for her. Suleman respected herself. Something I wish I could have done better.

Perhaps I would have been better off at McDonald’s.
Posted by Unknown at 9:10 AM No comments: