Picking My Battles (I Keep Forgetting) 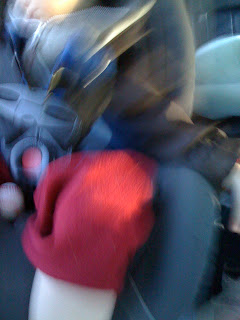 This morning was off to a decent start. My sinus infection was the least horrendous it’s been in a week and a half. I was ready to battle the day.

The kids were actually in the kitchen ready to get their shoes on at 8:30. And then the trouble began.

I guess my son’s Lightning McQueen sneakers are a wee bit big on him, so he likes to wear them on the wrong feet because he says they feel better that way.

“If you want them on the wrong feet, then you need to put them on yourself.”

“You’re going to put them on the right feet. It’s bad for your feet the other way.”

And I guess his patience was worn from the constant whining and complaining from my son over the last few weeks, so he picked up Cole, put him on his lap, and tried getting his sneakers on the right feet.

At this point, his coat is soaked with tears, his glasses are mucky. And the old sinus pressure? Kicking up a notch.

Now there’s kicking and flailing. The inevitable carry to the car and trying to hold him down to strap him into the car seat. But he’s got wiggly hips and I’m losing my calmness.

“I want my shoes on the wrong feet!”

I could use a tissue and some more Tylenol at this point.

Yes, here are gloves. Yes, the screaming stops. We walk outside, with no shoes. I strap him into his seat. I hand him his sneakers.

My daughter’s been sitting in her seat patiently this whole time. I start driving. Swing my head around to see Cole’s big eyes magnified in his new glasses. His feet in the wrong shoes.

“Look! A big yellow dump truck!” I point out.

There are bigger battles to worry about.

Are wrong shoes on feet really a big deal?
Posted by Unknown at 10:23 AM No comments:

Dangerous Hobbies with the Kids

This photo that goes along with the article, When it’s best to leave baby behind: A poster-girl for anti-cottonwool kids or the ultimate in maternal selfishness?, by Judith Woods on The UK’s Telegraph made me gulp a little extra hard.

Menna Pritchard is a rock-climber and apparently wants to include her child in her hobby. While I think it’s great she’s trying to find a way to combine mothering and hobbies, this might not be the safest decision. Especially when you note that Mom has on a helmet, but toddler doesn’t.

“Pritchard, 26, who is studying outdoor education, has said she regrets the fact that two-year-old Ffion wasn’t wearing a hard hat, although she also pointed out that this particular ascent at Three Cliffs Bay on the Gower peninsula near Swansea was so easy-peasy it didn’t, strictly speaking, require one. But any second thoughts about carrying her child up the cliff? Not a bit of it.

So does that make Pritchard a heroic poster-girl for the anti-cottonwool kids campaign? Or is she a marrow-chilling example of maternal selfishness?”

Woods goes on to describe the horrible accident that occurred in 1995 when a mother died on a treacherous mountain climb leaving behind young children.

“The prevailing opinion was that, as a mother, she had a duty of care not just to her children, but to herself…It must be noted that, by contrast, fathers who engage in dangerous activities come in for relatively little opprobrium. It would seem that in the popular imagination pursuits as diverse as skydiving, polar expeditions, insane Atlantic crossings in ever more unsuitable craft and fighting on the frontline with the Armed Forces fall under the all-encompassing rubric of “a man’s gotta do what a man’s gotta do”.”

So where does the answer lie for mothers wishing to pursue dangerous hobbies? Should fathers feel free to risk life and limb, but not mothers?

I would have to think that I would vote on the side of safety. If I was into mountain climbing, I would not stop following my passion. But I don’t think I would drag my child along with me.

We’re all going to die sometime and while I don’t want moms rushing to a premature grave, I don’t want them to hold themselves back from living their lives fully either. After considering the risks and benefits, I’d think you would make the choice that made the most sense.

And while I think it’s lovely to show an amazing mountain view to a child, I’m just not sure if it’s worth risking life and limb for.

What do you think? Would you include your child in a potentially dangerous hobby?
Posted by Unknown at 1:25 PM 4 comments:

The Local, France’s News in English, reports “A 53-year-old former teacher was less than thrilled to receive an email from Pôle Emploi, the French government-run jobs agency, proposing a position stripping in a local nightclub.”

Danièle Casadamont said, "If Pôle Emploi is suggesting we go naked for money, where's it going to end?"

The job agency felt it had nothing to apologize for because it was a machine that sent the email.

"There's no problem," said Pascal Blain to regional newspaper Midi Libre. "The offer is completely legal and there's nothing discriminatory. This lady received it because she has subscribed to job offers proposed in her region."

It does seem kind of odd that a federal job agency would be sending out notices about stripping jobs.

The former teacher summed it up pretty well: "The image of women is so mistreated today," Casadamont said. "It's time to stop asking us to drop our pants."

What do you think? Would you feel offended if your country’s job agency sent you a stripper job posting?
Posted by Unknown at 8:56 PM 1 comment: 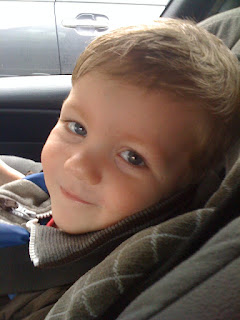 It’s kind of like a new show—Pimp My Banana, but then again, no, it’s not.

My three-year-old has not lost his terrible twos now that he is three, unfortunately. In fact, I’d say, he’s simply perfected them and made them into the threatening threes.

He screams, whines, cries at the littlest discomfort. You know, like when I don’t get every last crumb of granola scooped out of his bowl before we pour in the Cinnamon Munchies. Or when I tell him it’s time to put our socks on our feet, not our hands, when it’s time for school.

But this morning’s latest meltdown shines the light on how absurdly a three-year-old’s brain can work. (Yes, I know it’s not absurd, I mean, he’s three, but I digress…)

I told him he could have a banana—a whole banana—once he had on his coat and shoes for school. Well, with a bit more cajoling, he did finally put the aforementioned items on the correct body parts.

That’s where Dad comes in. He did not know that the agreement was for an entire banana, thus he peeled half a banana and broke off a chunk and tried to get away with giving our son just that one piece.

The screams. The cries.

“Well, do you want this piece instead?” I ask as I hand him the banana still cloaked in skin.

“I can’t do that, honey,” I say and even demonstrate that banana pieces will not restick themselves together.

I try all the tricks—offer him both halves, say it’s this or nothing, try to distract him with Lightning McQueen, but alas, the crying, it continues.

Finally, my husband scoops him up to walk out the door, “Here, take the banana.” He puts one piece in each hand, my son takes a deep breath, “Ok.” And they’re out the door.

Ah, motherhood. And bananas.
Posted by Unknown at 10:58 AM No comments:

Mothers Taking Care of Ourselves

A story on Jot Zoom reports: Mother Of Three Posts Suicide Note on Facebook Before Killing Herself.


“It seems that socializing networks are now an easy way for suicidal people to share their last wishes with their friends and family, as Cynthia Lee from Michigan, a 23 year old mother of three proves by posting a suicide note on her Facebook wall before she committed suicide.”

Stories like these just make my heart break because I can understand. I can put myself in this woman’s shoes so easily.

I’m lucky enough to be in a healthy relationship and have supportive family and friends, but if I didn’t? Raising three children in this day and age is a monumental task regardless if one is a stay-at-home mom, working mom, or some combination of the two.

The pressure to be a good mom and also have one’s own life and interests can be too much for some women.

I know I’ve been so stressed out when all three kids are having issues that it does feel overwhelming and like too much too handle. This is why it is so important that as moms we always have someone we can reach out to.

I encourage all moms who know they sometimes get stressed out to know who they will contact when they start feeling overwhelmed.

Call that person today and let them know that they will be your point-person if you need help. Then make a note for yourself in a prominent place that when you feel overwhelmed, you will pick up the phone and dial this person’s number.

It’s good to be prepared in advance. Know what you will do when you start feeling overwhelmed.

Let’s take care of ourselves and help other mothers to do the same.
Posted by Unknown at 10:47 AM No comments: