Cole’s jammies are very green pea covered. He’s kicking his little feet against my thighs, chewing on his fingers, and saying, “Mmm, mmm.”

Cole should be sleeping. He almost was—twice. But it didn’t take and I gave up and brought him downstairs with me. Now he’s staring at the computer screen.

It’s so slow typing with one hand and balancing a baby on your lap with the other. Lately, he only is content when he’s being held, which cuts down on my work output. Although I am moving forward with a few new writing projects that I hope to be able to share with the world soon.

Now my hand is slopping wet. I may even have a baby hickie on my thumb.

Tomorrow we’re off to a wedding. I promised myself not to spend too much time picking out the dress I’m going to wear. I decided to wear the first one I tried on even though I’m not fond of how my belly pooches out.

Any day now I’ll be starting back with abdominal crunches. And yoga. I’m getting there. Thinking about it is a big start.
Posted by Unknown at 8:30 PM No comments:

Kick to the Head

Bravo to this stripper in Florida!

There were many occasions when I wished to do what she did. After a slap on the buttocks, she kicked back.

Apparently, the customer had broken bones, even though the Cheetah manager said he came back later that same night for another beer.

If anything, the stripper should be suing the guy. Yes, that’s what she should do—countersue!

What a great way for her and the club to get major media attention.

I would gladly take the stand to support the need to kick strip club customers in the head when they slap you on the ass.

Some men think just because a woman is dancing nude that it means they are asking for it, whatever the “it” is that he feels like doing.

“Hey! If a naked woman if sashaying her naked stuff inches from my face, of course I’m gonna grab it!”

Hey yourself! That’s her job! She’s not there so you can grab her ass—she’s there so she can make some money!

Keep your hands to your own self (as Genny’s teacher would say)!
Posted by Unknown at 7:46 PM 2 comments: 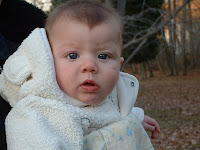 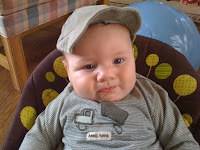 I was looking at photos of Genny when she was a baby. The similarities between her and Cole are striking.

Cole seems to have really discovered his feet tonight. He’s kicking his legs and shaking and grabbing his toes. And he’s all about making bubbly noises.

I’m feeling a bit under the weather. And I’m smelling Cole, who smells like a carrot.

Genny is watching a Barney video. Nick is on his computer.

My back hurts. I’m tired.

I did get writing work done today. I am content to end my day on this note.
Posted by Unknown at 7:27 PM No comments:

Today I am determined to keep on working, even if I’m tired, even if I’m typing one-handed while nursing. The only way to change what I’m not happy with is to take actions to change it. In this case, the “it” is not having a published book. If I need to work when tired, so be it.

The children need tending, the house needs to be prevented from falling down, clean laundry must be made available, and food must be eaten. But that does not matter. I must keep moving forward on my creative projects, even if slowly.

And I am glad that I was there to see Cole take his first playground swing ride today.

I want it all.

I want motherhood. I want work. I want my husband.

I will have it all, even though it means being groggy for awhile.
Posted by Unknown at 7:57 PM 1 comment:

To Be a Man 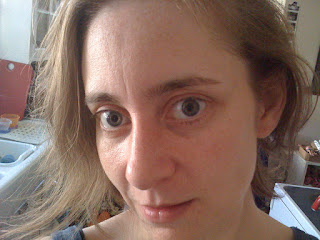 Today while I was cooking tofu and broccoli, I wished I was a man for the first time.

Through all the annoyingness of life as a woman, I don’t think I’ve ever wished I were a man before, but for some reason, stirring broccoli florets in salt and water, I did.

I suppose it had something to do with the seeming simpleness of the “male” tasks Nick was performing outside: bringing out the garbage, recycling, and watering the garden, while I tried to creatively cook the same thing I always cook. I had just gotten Cole to nap and Genny was in the living room sulking and moping for some unknown reason.

The thought just flashed through me all at once, “I wish I were a man and I could go to work, earn the bacon, come home and have my dear wife cook for me and watch the children.”

I thought it a curious thought as soon as it passed through me. I guess I was just feeling stressed and frustrated because I didn’t have time to do any creative work today at all. I so wanted to write and draw and study, but there simply was not time.

That is not true. During Cole’s long nap, I too napped instead of working, but he was up twice last night and then awake at six, so I was desperate for a rest.

I tell myself that I shouldn’t let tiredness be an excuse, but I know if I push myself, I end up sick.

Not having enough time makes me crazy. It makes me want to be a man for a brief moment, but then I remember how hard my husband works. It’s not like he’s rolling in time either.

Sigh. The struggle to have it all continues.
Posted by Unknown at 7:15 PM 1 comment: