Power in No Shame

I don’t know who Beth Ditto is besides that she’s a plus-sized singer not ashamed of her body, but I totally love this quote from her on Perez Hilton.

Girls in general have really nice things to say—especially big girls. It’s mostly men who aren’t as open. I think men fear me sometimes. I played in Greece last summer and, I swear, when I went into the crowd, people actually ran away from me. But things like that make me really happy. You make a decision: if you are going to participate in the music industry and put yourself out there, you have to know that it’s all full of shit.

There is a lot of power in the shock of being unashamed. A friend told me that flaunting a big girl body in a punk-rock way is kind of a libertine thrill, like a drug.

It’s kind of like a drug… it’s a performance. It’s funny how something so normal and mundane that you see every day—your body—can be controversial. The shock value is intense. It’s like carrying an art piece around with you all the time.

I most like the part about power lying in not being ashamed. I would like to make this a motto to live by. It won’t be easy, but it’s what I think is so important.

I can say, yes, I was a stripper, yes, I’ve got lots of issues that I’m trying to work out, and, yes, I think it’s important as a mother for me to be honest in a way that’s appropriate to my children’s ages and stages.

I never want to be ashamed of myself again (unless, of course, I do something that is really shame worthy…but I guess I’m the only one who knows what that would be for me).

The Secret to Marital Bliss

Well, I knew it had to be true and now there are scientific facts. Having kids is the worst thing for a marriage.

According to a study reported by MSNBC, 90% of couples had less marital satisfaction after the birth of a first child’s birth. And supposedly the satisfaction only gets worse. The article doesn’t explain precisely what is meant by “marital satisfaction,” but I imagine they mean it in a general sense.

What does this mean for the Stripper Moms and Dads of the world? It means we better get real with our spouses and talk about our marriages.

If this much dissatisfaction is rampant, we need to be prepared and be proactive. The best way to handle relationship issues is to talk about them.

I’m thankful every day that I have such an open, talkative, and loving husband.

Only this morning I woke up and realized I was angry at Nick. Why? Get this—because he can’t lactate! Yes, it’s crazy, but true.

I’m the one who has to get up three times a night to feed Cole. I haven’t had a halfway decent night’s sleep in almost five months. I know Nick would gladly give Cole formula in the night, but I really want to only breastfeed. And if I don’t want to pump, which I don’t, then it’s up to me.

For nursing mothers, I imagine this fact is probably one of the major psychological reasons that we have issues with not being interested in sex after childbirth (besides the obvious reasons).

The baby needs us and then our dear husband who gets full nights of sleep wants us to feel sexy, too? And to have the energy to want to get busy?

When nighttime rolls around, there’s only one thing I’m thinking about, and it doesn’t involve heavy panting on my part; it involves the sound of silence.

But I do want marital bliss and I do love my husband. And I do want to feel sexy again. I AM Stripper Mom, after all.

From what I’m reading online, this sex after childbirth issue affects a lot of women. So, expect to hear Stripper Mom talking more about sex, or lack of, or attempts to get that sexy feeling back.

Posted by Unknown at 2:03 PM No comments:

Octo Mom in the News Again

If you follow celebrity news at all, then you’ve probably already heard the latest on Octo Stripper Mom. You’ll remember that a few weeks back it was revealed that Nadya Suleman had been a stripper, but she said:

Turns out Nadya, or should we say ANGELINA, was a stripper for at least a year!!!

Of course, I don’t think it’s a problem she was a stripper…it’s a problem that she felt the need to lie about it. And for someone who’s now “famous,” it’s not like the public isn’t going to find out the truth.

Why do we feel the need to hide our pasts?

I don’t recommend going around just blabbing away to anyone you meet all your past indiscretions, but when you’re asked point blank in the media? And Suleman’s the one aiming for the media to cover her life (she’s supposedly in talks for a reality show).

I wonder how many women out there have a past that they’re afraid to talk about. And why? 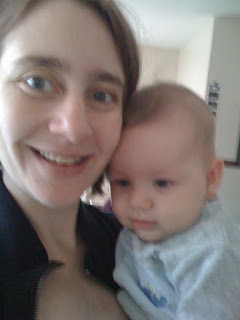 It’s amazing what Genny will do for three jellybeans and some playground time.

I needed a new dress for a wedding on Saturday; I told Genny if she would be patient while I tried some on then we’d buy a small bag of candy from the overpriced mall candy man and then play on the indoor playground.

Eight dresses and two bathroom breaks later, I had a dress with no fuss from Genny. Cole woke up as we wheeled to the sweet shop. We bought about seven jellybeans for 51 cents and headed to the bizarre soft sculptured playground.

Genny told another little girl that she didn’t want to play with her because the girl was trying to tell her what they were going to do. I was proud of her for not being a follower. Later, the girl started following Genny and imitating her as she ran and jumped onto the bridge-slide. This Genny was fine with because it was on her terms.

I sat on the pleather couch nursing Cole wondering whether a mall cop might scold me for indecent exposure.

I gave Genny a 15-minute countdown to leaving, which she didn’t argue with at all. She even held it together long enough for me to stop and buy a new pair of shoes, too.

Man, those jellybeans were the best 51 cents I ever spent.

This video is what I imagine many people are going to be looking for the next time they google Stripper Mom.

Just for the record, that’s not me.

I think Stripper Moms should make sure their kids are in bed before they start shimmying around seductively in their underwear. But maybe that’s just me. 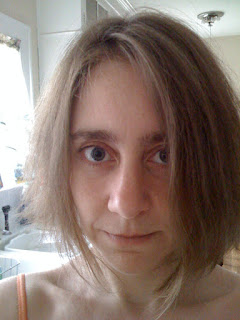 I am feeling the darkness of the rain today. I’ve given in to it; there’s no sense in fighting this gloom.

Genny is hunkered down with a Care Bears movie and Cole is sleep-nursing on my lap.

I should be doing laundry, washing dishes, cleaning, figuring out dinner, practicing yoga, or being otherwise productive. But I am not. And the very fact that I am feeling guilty and depressed clearly means I have not given in to the darkness.


I know the video will end and Cole will wake up and I will need to be Mom again.

For a few moments, let me just be Sheila and sip my coffee in silence. 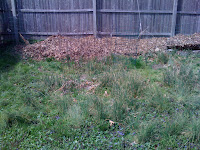 You would think starting a garden would be easy. You would be wrong.

Our garden area is infested with onion grass that we casually threw aside last year and since then decided it wants to live. The roots are deep and if we don’t get rid of them, they’ll just multiply.

Genny was gung-ho about gardening until she got outside and realized farming involves work. 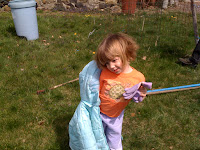 “I want something cold to drink!”

“In a little while.”

“Take off your gloves. 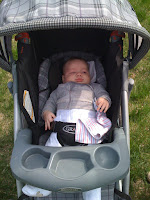 Instead, she woke Cole up in his stroller.

Nick was left to cultivate the ground with a pitchfork while I tended to the screeching and whining.

Nick made it about halfway through one row. We plan on having about one gazillion rows, so we have a bit to go. 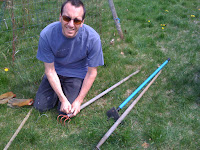 Posted by Unknown at 3:59 PM No comments: